September 29, 2015
Human beings never cease to amaze me. I walk down the street and everyone wants to pet my dog. She's adorable, loves attention, people love petting her. But if I were to ask for money to pet her, what would they say? I don't know. They'd probably think I was weird. Yet Cat Cafe's are popping up all over the world, and people pay to pet animals that, unlike dogs, take great joy from tearing flesh off arms.

I've had cats as pets. I say 'had' cats as pets because one does not own a cat, one 'has' a piece of nitro glycerine that can go off given the slightest change in atmospheric pressure or a slight jolt in equilibrium or simply because it is designed to explode.

Most of my cats were nice. One was a rescue cat, a ginger tabby I called J.R, and once I got him used to me he was loyal only to me. He used to curl up on my lap at night and he almost break my jaw with his head-rub kisses. He was a sweetie. It broke my heart when he got cancer of his kidneys and I had to take him to the vet and say goodbye. I balled my eyes out for days.

Another cat, another ginger tabby, had wandered into the yard one night and kept returning. I think he had a home but cats can, and do, often choose their homes. I called him Fagan. I had to rehome him when I moved into a unit that didn't allow cats. To this day I cannot understand why home owners deny tenants the beauty of pets. If they do damage, charge the tenant. Pets give far more in love than they take in damaging doors due to scratching.

I said before that cats choose their homes, such as the grey tabby called Max whom I tried to put on a diet and he responded by going to live with the people who over fed him. This cat would hang onto the screen of the door and howl to get inside to eat.

And I had a ragdoll cat walk into another yard whom I adopted.

I'm seeing a pattern here. I adopted all my cats, some I chose, some chose me. I adopted my dog from the pound. Yes, definitely a pettern (I just made this word up, it's not a mistake).

One cat in particular was the devil, and he was the first cat of the lot so perhaps he wanted to continue to show his dominance. Even spayed (all my animals are spayed so there are no unwanted litters), he would shred your arm if you petted him the wrong way or for too long. He would shred your leg if you happened to walk past him in shorts. I am a huge animal lover but this cat was the asshole of cats. He would also beat up the other cats if you so much as spoke to them. His name was Wolfgang. I miss that he was once a nice kitty, and perhaps age might have abated his temper, I don't know, I had to rehome him too, though I gave him to the ex's parents and said "Good luck."


So anyway, back to cat cafes. Tokyo has 39 of them. You can also rent pets to reduce the stress of daily urban life inside tiny apartments. And I have to agree, there is nothing more relaxing then petting an animal. I now have a small dog who sits on my lap while I watch TV. I have been free of flesh shredding since 1998.

In America, the cat cafes double as adoption centres. Not always possible in Japan since most apartment blocks forbid pets. Hundreds of animals have been adopted from these cat cafes in America. And what a great program.

I remember as a child the travelling petting zoo. It would move around the schools and shopping malls and give children the chance to pet lambs and ducks and rabbits. So this is like the petting zoo for adults. I for one love the idea of animals and coffee. Yes, I know strict regulations around hygiene, blah blah blah but I tend to get sick from what chefs put in the food, not what animals are in the nearby proximity.

There is even one internet company in Japan that has nine rescued cats living in the office. The company claims that workers are less stressed, more communicative, more productive and let's face it I'd want to hurry to work if there were pets running around the office. Not only does the company have nine rescued cats, every day is bring your pet to work day. And if you don't have a pet you can get paid $42 a month to adopt one of there. I just wonder what the cats get up to at night.

So the idea of the cat café is to grab a coffee and pet a cat. If you really want to know how to do this properly, this site is worth checking out as it will explain all the petting zones. Good luck and happy petting. 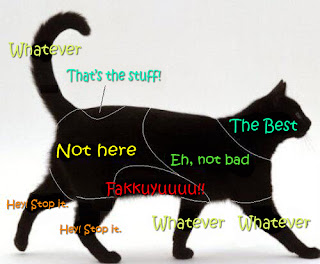