July 12, 2016
I've spoken in length on my blog about editing, self-publishing, querying and trying to secure an agent and or publisher. What I haven't spoken a lot about is the first draft.

In a few weeks I'll be in a role as mentor at a writers retreat. (You can check out the details here to get an idea of what we're doing). 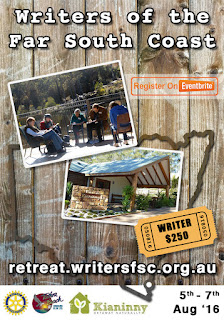 The focus at this retreat is the first draft. I'll be writing a first draft alongside these authors and providing assistance and answering questions. As an author who recently completed the James Paterson Masterclass, I can honestly say I will be approaching my next first draft more clinically than the other first drafts. I will muse over three ideas and pick the best one, then I'll create three main character elements, then I'll prepare a detailed overview.

After this it should be a matter of typing as fast as I can to get the first draft finished.

The timing of this first draft sessions is perfect. My current Work In Progress should be finished this week and will become a Manuscript. I'll be pitching to agents the last two weeks of July, then it'll come to a halt because of Dead Month. This is the month that most agents and publishers take off to catch up on reading and recharge. Which means for August I'll be straight into my next novel.

For me, there is no slowing down. My husband has a saying when he goes out to catch fish for us to eat. The more lures he has in the water, the more chance he has of bringing home a snapper. I have adopted this philosophy and the more books I have out there with agents, the more chances I have of landing one.