Why I submitted to Kindle Scout

September 29, 2016
I can't even exactly recall how I learned about Kindle Scout and it was only a few days ago. I checked it out, much like you're probably doing right now, and weighed up the pros and cons of giving exclusive ebook rights to one company. 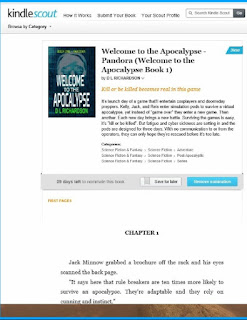 There are a few reasons I chose to submit.

I must confess, it's been 3 years since my last novel was published. In the meantime, I've self published an omnibus, a novella, a short story was published in a charity anthology, and I loaded all my short stories to my website as free reads. But they aren't part of my writing goal.

When my first novel The Bird With The Broken Wing was published by Etopia Press is 2011, I had a plan to publish one novel per year, heck two if I could get the time to write. In 2012, Feedback was published by Etopia Press. In 2013, I pitched Little Red Gem to agents and publishers and the response was overwhelmingly against paranormal romance because editors were (and I quote) "suffering from paranormal fatigue". Nothing could change their mind, except time. Which I didn't have. My plan was one book per year. So a friend suggested I self publish.

So the number one reason I submitted Welcome To The Apocalypse to Kindle Scout, I want to finish 2016 off with a published book. This book has been through pitching and edits and it needs to be read. So whether it's accepted in Kindle Press or not, look out for this series. Book Two is ready for edits.

Kindle scout offers an advance to writers who are successful. Who couldn't use an advance? Small press and indie publishers rarely pay advances. The big publishers do but it can be difficult to get past their gatekeepers. That advance is really gonna help with promotion. And they estimate authors can earn decent royalties over the 5 year contract. I imagine it's going to involve loads more promotion, hence the advance, but I'm up for it.

Now for some of the pros and cons.

Cons:
You can learn more about the Kindle Scout program here.

Part one of my Kindle Scout thread can be read here. I'll keep posting and share marketing tips along the way. What's working, what isn't.

And if you're thinking of submitting or already in the campaign, Good Luck!