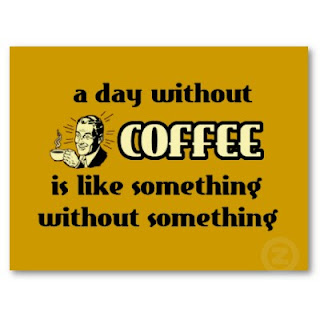 For the next few months I'll be talking with Aussie indie authors in my virtual cafe, where we'll talk about books, writing, what makes us laugh, and most importantly, how we have (or not in some cases) our coffee.

Today I'd like to welcome Tabitha Ormiston-Smith to my virtual coffee chat room. She lives in Melbourne, the coffee capital of Australia, though I'll probably start a debate with that statement.

I've just poured myself a cup of percolated coffee and I take it without milk and with one sugar. Now let's meet Tabitha.

Tabitha Ormiston-Smith has been a pilot, systems programmer, credit controller and various other things. She has degrees in Computer Science, Philosophy and Law. She operates an editing business.

(I don't know about you but I'm pretty in awe that she has been a pilot.)


DL: Since this a virtual coffee chat, how do you have your coffee? Are you a morning or afternoon person?

Tabitha: Strong, with a tiny bit of milk. In cafes I have to order it with the milk on the side to stop them putting in too much. I only use about a spoonful. It comes in those cute little jugs, and provided no one is looking, Emily has the rest.


(This is Tabitha with Emily) 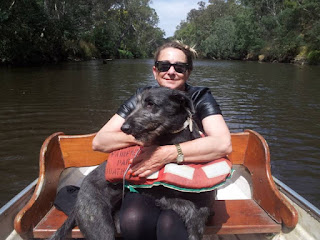 DL: You have a wonderfully impressive collection of books. Which one is your favourite?

Tabitha: It's not all that impressive a collection as about a dozen of those ebooks are singles - short stories that I published on their own. I did a lot of that when I was getting started writing short fiction. They make nice little gifts and that helps to get my name out there. Now as to my favourite, that's a harder one. I think out of the actual full-length novels, Gift of Continence is still my favourite. But if it's out of everything I've written, The Real Winner is my personal favourite. That's a long story, and in my opinion (which is subjective and may of course be worthless) it's the best thing I've done.

DL: Animals and humour feature in many of your stories. What has an animal done recently to make you laugh?

Tabitha: Emily makes me laugh all the time. I wake up and see her spread-eagled on the bed with her legs spread. Below is a picture of what I mean. Last night she came into the bedroom just after I'd gotten into bed and she spat a tennis ball at me. 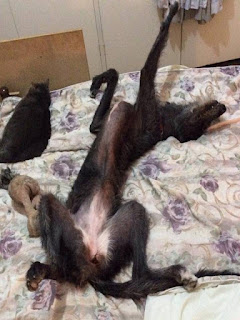 DL: How long have you been writing? And what is your biggest achievement so far?

Tabitha: I've been writing for much longer than I've been published. For a long time, two and a half completed novels sat on my hard drive. I only started to publish in 2009. My biggest achievement is certainly finishing "King's Ransom". I had left it half written for years. I got myself unstuck in April Camp Nano of 2014, then finished a first draft in November Camp. In late 2015 I completed first and second revisions and only published it this year, on 1 September. I found historical fiction appallingly troublesome to write. Had I but known how much trouble it was going to be, I'd certainly never have started it.

Tabitha: As I am Australian, obviously my favourite biscuit is Tim Tams. They are not so much a mere biscuit as a national sacrament.
Tabitha is promoting her latest book "King's Ransom". "King's Ransom" is a satirical retelling of  Robin Hood. 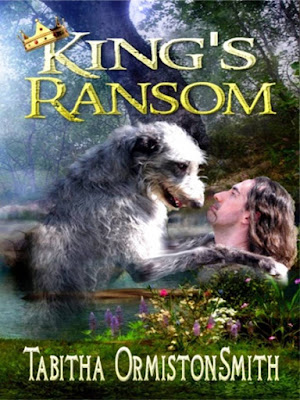 "King's Ransom is fresh, fun and food for those who read for character over plot. Highly recommend." Amazon review

Here are other ways you can show your support to Tabitha.
Check out her WEBSITE: http://tormistonsmith.wix.com/Tabitha
Follow Tabitha on FACEBOOK:
https://www.facebook.com/pages/Tabitha-Ormiston-Smith/137637486306612
EMAIL Tabitha to ask a question: Tabitha.Ormiston.Smith@gmail.com
Discover her books on AMAZON: http://www.amazon.com/Tabitha-Ormiston-Smith/e/B004TE35RS/ref=sr_ntt_srch_lnk_4?qid=1369037324&sr=8-4
Discover her books on SMASHWORDS: https://www.smashwords.com/profile/view/RainbowSerpent