October 08, 2016
Well, it's been 10 days since I launched Welcome To The Apocalypse in the Kindle Scout campaign. As promised, I'll give a weekly update. Here is this week's update.

It is exhausting promoting day and night to drive traffic to the site and seek nominations. My average is 40 views per day, and there are no statistics on the number of nominations this has converted to, nor the number required to be considered successful. My advice. Pack a picnic, you won't be leaving your office. 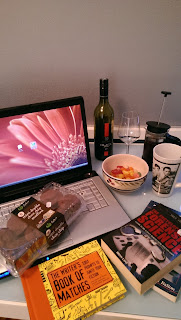 I should firstly state that nobody knows anything about Kindle Scout so this takes a lot of explaining. Rookie mistake. I should change to "publishing deal with Amazon imprint". At least everyone has heard of Amazon. I also stated in my advertising and newsletter that it's the writer's version of "So You Think You Can Dance", which I think has helped explain about the program.

Here is a breakdown of where my traffic is coming from:

FACEBOOK
It's no surprise really. Most of my traffic is coming from Facebook. I paid for two ads (approx. $30 each), one to the Kindle Scout link, and one to my website where I'm hosting a cash giveaway. Almost half of the views came from Facebook. And I'm quite social on Facebook. Cost: $60

CASH GIVEAWAY
I know 20 nominations have come from the Rafflecopter giveaway. I've decided to giveaway $50 cash. If you're interested in entering, here is the link. Giveaway ends Oct 28. Cost: $50.

TWITTER
I paid $40 for a Twitter blast. The results are rather disappointing. I often hear that Twitter is the only way something will go viral. I say jury is out. I will have to work on my Twitter engagement. But I decided to drive traffic to Twitter myself by doing a giveaway on Amazon at a cost of $25 approx. for print book and postage but this will give me 500 new Twitter followers. Cost $65.

EMAILS
An equal number of views have come from direct clicks from an email sent to writer friends, from my author blog and from my website. Cost: time

NEWSLETTER
Over the years I have gathered over 300 emails from readers. Only a few views from this. But I have planned to do follow up newsletter. sign up to my newsletter is you want to see an example of what I sent.

GOODREADS
A good number of page views have come as a result of launching a Goodreads event. This is where accepting all those friend requests comes in handy. Goodreads will send an invitation to them all. Cost: time

Cost so far for the campaign: $175
Well, if it's published they will pay an advance, and as the old saying goes, you gotta spend money to make money.

What else is to come:

GUEST POSTS ON BLOGS
I emailed 50 blog sites and received 5 requests to host a guest post to promote the campaign.

GOODREADS
More emailing the Goodreads contacts because this is a time consuming process if you want to send a personal message to your real and actual friends, and worth it. Friends do like receiving a personal note.

GOOGLE +
More engagement on Google +. This is an untapped platform for me, but my google page has achieved over 200,000 page views so I should be utilising it better.

NEWSLETTER
I have scheduled to send a reminder newsletter at the 15 day mark.

I hope this is helpful. Anyone who has any tips or advice on keeping the momentum rolling is more than welcome to share them.

Earlier posts about Kindle Scout can be found here.