A novel tribute to guardian angels

Growing up, books were scarce in our house. What books I read were borrowed from the library or given to me. But I wasn’t starved for imaginative stories because growing up with my mother you didn’t need books to fill your head with tales of mythical creatures. She was, and still is, more than happy to do this herself.
You see, my mother believes in dragons, fairies, ghosts and guardian angels. She believes in demonic possession, witches, druids, Hobbits and that the pyramids were built by aliens. On top of all this she’s Welsh and Welsh people are higher superstitious, though she used to play on this superstition and pretend she possessed powers to repel bad luck as a means of extorting money off her neighbours. It’s no wonder I have an active imagination. But I’m starting to think it’s a wonder I’m not terrified of my own shadow.
My mother told me the tale of my guardian angel when I was fourteen years old. This was around the time my best friend, Vicki, and I were watching horror movies such as Evil Dead, Incubus, and The Amityville Horror. After she told me the tale I didn’t think I’d ever get to sleep again. 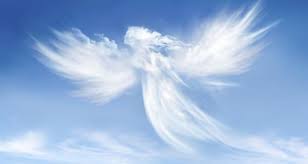 I was four when this happened, my mother told me. One morning I'd woken up and asked my parents who the lady was who sat on the end of my bed and watched me while I went to sleep. My mother had asked me what the lady looked like. I'd told her that she wore a white dress. Did this lady do anything, my mother had asked? No, I'd replied, she just sat on the end of the bed. Ah, my mother had thought to herself, this is Deborah’s guardian angel. (In my mother’s expert opinion ghosts in white dresses are angels. Ghosts in black dresses are demons. I often wonder that if I’d said the lady was wearing a black dress whether I might bear the scar of a cross on my forehead from being exorcised.)
Anyway, after I'd told my parents that a lady in a white dress sat on the end of my bed watching me drift off to sleep, and after they'd tucked me into bed, they'd waited a few hours and snuck into the room. The next morning they'd asked me if the lady had sat on the end of my bed and I replied yes. My parents hadn’t seen a thing, yet according to my mother’s expert opinion, only the ward of the angel can see their angel, so she'd believed me.
To this day I don’t know whether I really did a lady on the end of my bed, or if my mother filled my impressionable young head with tales of fairies and I conjured one up, but my mother believes I have a guardian angel. And if she says I have one then I must have.
Maybe it’s instinct or maybe it’s an unseen force, but sometimes I think guardian angels are the little voices in our heads that tells us which direction to take. When we listen, we go down roads we would never have otherwise taken and find our dreams waiting for us. Sometimes we stop for a second, and in doing so miss the bus but discover that missing the bus has changed our lives.
If I truly do have a guardian angel watching over me, then my YA novel "The Bird WithThe Broken Wing" is the only way I know of giving her a voice, because as many stories as I have to tell, she has many more.
What stories do you have about guardian angels. Do you have one? Do you know someone who does? Do you even believe in them? I'd love to hear your thoughts about guardian angels.
About the book:
"The Bird with the Broken Wing" was first published by Etopia Press in 2011. It is now available with a brand new cover and for a lower price in both ebook and print. Join other readers who have fallen in love with the dark fantasy story about redemption and forgiveness. 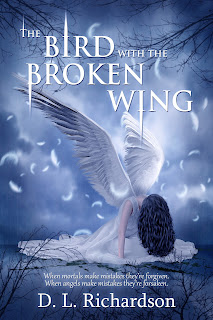 When mortals make mistakes, they're forgiven.
When angels make mistakes, they're forsaken.
Guardian angel Rachael finds herself trapped in Purgatory with Ben Taylor, a young soldier with a secret that's driving him insane. Desperate to see him ascend into Heaven she breaks the rules about becoming involved and keeping her identity a secret. Her decision to stay in Purgatory to help Ben seems a good plan. Except they've been stuck for ten years already and Ben is no closer to ascending.
The unexpected appearance of a feisty teenager, Jet Jones, throws Rachael's wings into a tailspin. The instant attraction between Jet and Ben means the angel's work is getting ignored. And without her help, Ben's soul will be trapped and she will have failed in her mission.
But Jet's appearance also brings a chilling revelation. Maybe Ben's soul isn't the only one that needs saving.

September 30, 2020
People often ask me how I come up with my story ideas. THIS is how I come up with story ideas. The following is a true event. I woke to the sound of the doorbell ringing and glanced at the clock. It was 2am. I thought I had just woken from a dream. Then my husband rolled out of bed and stood up to stare out the bedroom window. I mumbled, "What's up?" He said, "If you can believe it, the doorbell just rang." "So it wasn't a dream," I said. Our front doorbell had chimed at 2am in the morning. Our front door is downstairs, we were sleeping upstairs. The husband was staring out the bedroom window which overlooks the driveway, but I don't need to get up to know that we can't see down to the front door.  I gave him the most logical explanation I could think of at 2am in the morning. I said, "It's probably the battery dying." He agreed, and we both did a quick look out the front and back windows before heading back to bed. I never we
Post a Comment
Read more