Extract from Book 2 in an exciting new sci-fi series

May 22, 2017
The countdown is on. June 8 is the release date for Welcome to the Apocalypse Book 2 - CyberNexis. This is my first series. Prior to this, my books have been snapshots of a moment in a character's life, all standalone novels or short stories. When I started writing the story of three characters, Kelly Lawrence, Jack Minnow, and Reis Anderson, who become trapped in a virtual reality game battling a new apocalypse every day, I knew it would take much longer to tell this story than one book. I'm planning to write 4 or 5 novels to tell this entire story. Because there was a reason the computer failed... 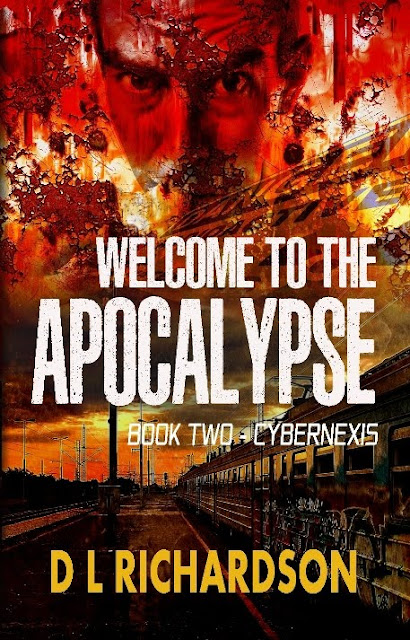 Getting out of the game used to be all that mattered. Now all that matters is getting back in.
In book one players were trapped in a virtual game. Finally rescued, they're taken to an offsite facility where they'll spend a few weeks recovering from muscle dystrophy and cyber sickness. But not everyone survived.
Not only do Kelly, Jack, and Reis have to cope with the deaths of players they've come to respect and love, they'll have to cope with the reason behind the computer malfunction. All the fingers are pointing at the game's creator, CyberNexis.
If you like exciting twists and complex characters, and if fun and entertaining reads are what you're after, then you'll enjoy this second instalment in the Welcome to the Apocalypse series.
Buy the book 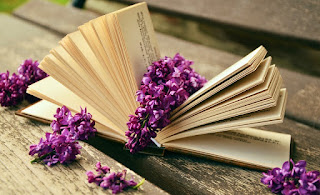 The internet always crashed at home. Without fail, a quick search for a recipe turned into an epic battle, lasting longer than the Napoleonic War. However long that was; Kelly Lawrence didn't actually know because the computer had crashed the day she'd tried to find out.


The cause of her aggravation was not the plastic box and silicone chips that housed the data. The culprit was a non-sentient thing, capable of wreaking more havoc than a sugared-up toddler in a china shop. The culprit was cyber space. Littered with viruses, worms, malwares, and Trojans.


Why had she placed her life in the hands of a something prone to collapse?


Because it was meant to be a game.


It was also meant to be fail proof.


Someone was whispering in her ear. "It's over. You're safe."


No such thing as safe, she told herself, tuning out the voice floating to her from a corridor that could only lead to her darkest nightmares. She'd had enough of nightmares that charged towards her with blind fury, sending fiery sparks that stung like ant bites and always heralded another battle with monsters that wanted her dead.


"She's slipping away," the faraway voice said. "Come on, Kelly. Fight it."


Some people were born fighters. Others learned the skill. But always, even when you won you lost something.


What was the point of fighting? Pandora was never going to let her go. Yes, they'd given their cybernetic nemesis a name. Over one hundred people had entered simulation pods to escape reality. When it'd gone horribly wrong, it'd made sense to name their enemy after a goddess who'd unleashed hell upon mankind. All they'd had left was hope.


Even that was gone now.


Kelly let the darkness drag her away.

Kelly opened her eyes and was taken aback for a second. Seated opposite her was her late husband, Matt. Her heart lifted a little. He'd found her. Or had she found him? It seemed she recalled, hazily as if under the influence of a drug, that she'd gone in search of him inside the game, and here he was. He looked exactly as she remembered, with his dirty-blond hair that refused to stay out of his eyes, wearing a green shirt that melded to his body with adoration. He'd be almost thirty-one if he was alive. She was on the downhill side of twenty-six. These details should have mattered.


Instead, something akin to fear grew inside her, building the way a tornado does until she knew that whatever was heading her way could only be dangerous. Like a shipwreck survivor adrift in the ocean, Kelly slapped at the surging darkness to grab hold of the faraway voice. It was gone. She was alone with the ghost of her dead husband.


"The pursuit of happiness is a sink," Matt said, stabbing a slice of toast into the runny yoke of a boiled egg. "You fill the bowl with things that make you happy; shopping, drinking, smoking, eating. Whatever. Then you wake up the next morning to discover that the sink has a hole in it and the bowl is empty. What do you do?"


Too tired to take the bait to an argument so old it could only be interpreted with a hieroglyphics manual, she let her shoulders slump. She cast her gaze around the cafe where she and Matt had spent most Sunday mornings. The rustic decor of copper pipes converted into bookshelves, wine barrels made into tables, old jam jars used as drink glasses...these decorative items had once fascinated her. Now they terrified her. Only Matt could have replicated this virtual world. A world that both touched and saddened her heart at the same time, for this world was a glimpse through a window. Memories were all that were on offer in this cafe.


And yet, the past could only haunt a person if they let it, so why was she?


"Kelly?" Matt was scowling at her with a furious look in his eyes. The real Matt only ever scowled in fierce concentration, never in anger. "What do you do?"


"My addled brain sports neither concern nor clue," she said, quoting her dead husband who'd once spent a month talking like a Shakespearean actor while working on a Mediaeval cosplay website. This version stared at her blankly. Proof that he wasn't real.


The moment the words left her mouth she felt the air shift. The cafe faded and in its place was a war zone. Buildings were on fire, guns were being fired, smoke filled her nostrils.


The window beside her smashed, glass flew into the plate of eggs, and someone - no something - jumped through the opening.


There wasn't anything human about this creature. It had matted hair that was encrusted with dirt and blood. It carried knives in both hands and the hide of a deer was wrapped around its back. Bones hung around its neck and when it caught Kelly's gaze, it growled. The spell was broken. Her reflexes sprang into action. She ran out of the cafe.


Whatever happens next, she told herself, just keep running.


The beast matched her pace, running beside her with its wild hair trailing like a horse's mane. It turned its head and smiled, revealing yellow teeth. In her head she heard a voice yelling at her to go left, and so she did. But she ran straight into another creature.


It held a knife above its head. Staring at it, she noticed it was too small to be knife. A syringe! The beast swung the syringe down into her neck.


Except it wasn't a syringe, it was a computer cable. 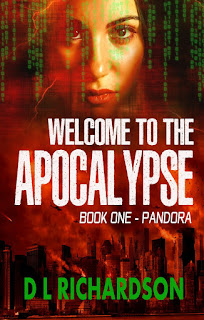