Welcome to my virtual cafe. I haven't had a coffee chat for a long while. I'm delighted to invite fellow Aussie author Shelley Russell Nolan onto my virtual couch for a chat. 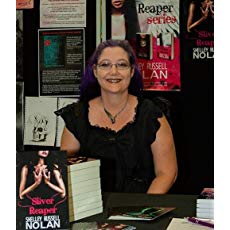 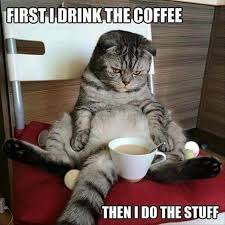 SHELLEY:  I have always been a tea drinker, but after going to coffee shops with family and friends and getting annoyed at paying for hot water and a teabag while everyone else had fancy coffees, I decided to give coffee a go. I started with ordering caramel lattes and then moved on to mochas, so not a strong coffee for me. But at home I will have a cup of Moccona after school drop off, usually while catching up with other mums. For the rest of the time I am back to my black tea.

DL: You are an avid reader. Do you feel the tug of writing while you are reading? Or you able to fully immerse yourself and separate the writer from the reader?

SHELLEY: I have found myself to me a far more critical reader now than before I got serious about my writing. It can be hard to switch off the editor side of my brain as I read and ponder what I would have done different or get an idea how I can incorporate a new to me technique into my own writing. My favourite reads are ones where I get so caught up in the story that I forget about everything, the cup of tea going cold, the housework ignored. It is after the last page, when I return to reality, that I look back on what it was about that particular story that hooked me, and then try to come up with ways to hook my own readers.

DL: What is one of your guilty pleasure books/genres to read (i.e something that nobody would suspect you enjoy reading)?

SHELLEY: I love historical romance. I’ve never had the urge to write one, but I love getting swept away in a different time. I started out reading Barbara Cartland when I was in high school, but her fainting heroines soon annoyed me and I moved on to Regency Romances with more spirited heroines and humour. My current favourite historical romance author is Anne Gracie.

DL: A while ago my mother gave me a bundle of old school report cards. Written under the English lesson section were comments such as 'Debbie has an active imagination', 'Debbie loves to tell stories'. I also recall one teacher writing 'your beginnings are too long'. If we were to look at your old school report cards, what sort of comments would we see next to your English lesson? And was there any piece of advice/criticism a teacher gave you that has stuck with you?

SHELLEY: All my report cards said I was a bright and easy going child but had a tendency to talk in class. They also mentioned my messy writing and that I had to slow down to stop making careless mistakes. My writing, and typing, is still atrocious. I wish I could say that I had English teachers that inspired me, but in high school I was most often left to my own devices. I would complete my work and then pull out a book and read until the rest of the class had caught up. The teachers at my school who loved writing taught the students who were struggling, not ones like me who loved to read and write. I remember showing the first chapter of a story to my Grade Eleven teacher and she said ‘That’s nice, but you should be careful not to have too many point of view characters.’ This was for an epic fantasy, with five main characters. After giving her advice, she went to the other side of the classroom to talk to the other girls about boys. I left school that day disheartened, and have never finished that story.

DL: I find that most fantasy authors started with a love of fairy tales and myths. What is your favourite fairy tale or myth? And would you/have you written a story based on that tale or myth?

SHELLEY: I remember reading and rereading Grimm’s Fairytales as a child, but I can't say that any particular story stuck with me. Though I was sad when the book disappeared after a move. But my latest book, Dark Justice, does have a Beauty and the Beast vibe. I have always loved stories where enemies are forced to work together, finding out they have more in common than they think, and maybe even fall in love along the way. While the main characters in Dark Justice are not enemies, they are thrust together due to circumstance, and it was interesting to have a man who is infected with a virus that drives him to kill become compelled to protect the woman who is to decide the fate o mankind. But this story was inspired by an episode of Buffy the Vampire Slayer, and not a fairytale.

SHELLEY: While there are readers who only like a certain genre, I write for ones like me. Fantasy is my first love, followed by science fiction. But I also like to read action adventures, thrillers, historical romance and even horror. I grew up reading Stephen King, Dean Koontz, David Eddings and Anne McCaffrey, but I was also reading Catherine Cookson and Phillippa Carr. For every reader that will write only one type of book, there is another who will devour them all. As for a pen name, I feel the speculative fiction genres fit well together so am happy to write under one name for them. If I suddenly decided to write a historical romance then I would use a pen name as they would not fit under the same brand.

SHELLEY: I must confess to being more of a savoury than sweet person. So I would choose cheese biscuits over cake. I often make cheese and chive muffins and smother then in butter while they are still hot. I also like gingernut biscuits. My favourite cake is a ginger cake, made from an old family recipe that uses golden syrup, cinnamon and spice as well as ginger. Second would be sultana cake.

Keep reading to find out about Shelley's latest book and the great deal she has at the moment.

"A fabulous start to a new series." Keri Arthur said of Book 1 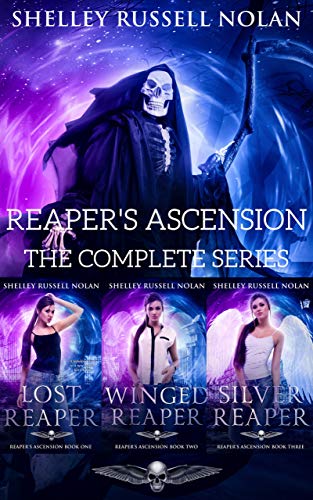 'The first dead body I ever saw was my own' - Tyler Morgan. Twenty-five. Murdered by the Grim Reaper

Welcome to the Reaper’s Ascension Series, where death is only the beginning!
After she is resurrected by the Grim Reaper, Tyler Morgan discovers a dark and hidden world. Not sure who to trust, and with enemies closing in, she will have to master her newfound abilities to have any hope of staying alive.

This set contains all three books, and the prequel short story, delivering a spine chilling urban fantasy sure to delight fans of the supernatural and suspense.

CLICK HERE TO READ MORE AND BUY YOUR OWN COPY

Want to find out more about Shelley Russell Nolan:

Shelley Russell Nolan is an avid reader who began writing her own stories at sixteen. Her first completed manuscript featured brain-eating aliens and a butt-kicking teenage heroine. Since then she has spent her time creating fantasy worlds where death is only the beginning and even freaks can fall in love. With more books for both young adults and adults in the works, Shelley plans on writing for as longs as she has the power to type.

Shelley currently lives in Central Queensland, Australia, with her husband and two young children. They share their home with two wrecking ball kitties, a deformed budgerigar and two dogs that are fairly normal as dogs go. Shelley loves to hear from her readers so feel free to contact her on Facebook or leave a review on Amazon or Goodreads.